If you don’t know what’s wrong with this picture (or rather, T-shirt) and you intend to write

—a literary masterpiece or a letter to Grandma—you need an editor.

Imagine my surprise when one of the detectives on the new TV show Murder in the First (TNT) realizes that a suicide note is a fraud based on an unusual use of an apostrophe! Punctuation meets Prime Time!

Noticing that “shouldn’t’ve” (as in “I shouldn’t’ve killed that girl…”) in the supposed typed confession was—coincidentally—exactly the same as in a workplace email communique, the ace detective (as in A+ in English!) researches the statistical commonality of the double contraction … checking with UC Berkeley’s linguistics department (a nice plug for my own alma mater!) and voila! a killer is identified. (In case you’re interested, according to what the detective told the suspect, only 1 in 800,000 use this particular double apostrophe.) 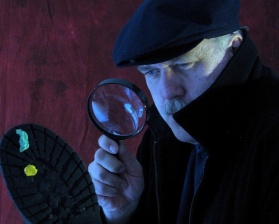 work. Which gives me an idea; rather than referring to myself as an editor, I think I will now consider myself a grammar gumshoe.

Contractions of the unmaternity kind

As I diligently edit manuscripts, I’m struck by a trend with “my” first-time writers: not using contractions … and in fact, working very hard to avoid them.

Did I miss the memo?

Somewhere in the recesses of my mind, I recall hearing a rumor that good writing should not (note: shouldn’t) make use of contractions. Perhaps in a PhD thesis, or a technical manual, or a story (fiction or non) based in Elizabethan England. But when telling a story with a conversation between two street thugs hanging out in New York’s Central Park in 2013? “Hey, dude, you are looking good!” “You, too, bro; how are you doing? What is happening?” Ha.

Of course I do believe in following the rules of grammar and punctuation, spelling and capitalization – after all, that is what I get paid to check. But I also believe that writers need to use common sense – that writing is as much an art as it is a science, and therefore, not all rules need apply (if there is such a rule).

Unless, of course, you are Dr. Suess.  Green Eggs and Ham might not have worked too well if he had written: “I don’t like them, Sam I’m.”

I often work myself into contortions trying to stress the importance of proper punctuation … but sometimes all it takes is an example so succinct that the point is driven home without so much as a deep knee bend.

No… I’m not talking about  fine wine.

Thanks to my new Bend friend, Anita, I’ve learned that there’s a name for those “morphed” words we create: smog from smoke and fog,  blog from web and log, Brangelina from … well, you get the point.

I did a little googling on the portmanteau (eaux-plural) and like potato chips, I couldn’t stop with just one! Spork, brunch, Spanglish. I fall asleep thinking of new ones. Tune in.

At a recent writers conference in Las Vegas,  I presented a workshop on editing and handed out this little “tail” to emphasize the importance of NOT relying on spell/grammar check . How many mistakes can you find?

Once there was a sweat little girl that was going threw a faze always wearing a read hood and a cloak that complimented her hare. Every one called her Little Red Riding Hood.

One day her mother tolled her, “Take this basket of whine and cake. You’re grandmother has bin sick, and these will aide her recovery. Pleas be careful, or you mite fall in a whole and brake the bottle,” she said, hoping to ensure that the treats would stay in won peace.

Little Red Riding Hood went on her weigh. She passed the village and when she entered the woods a loan wolf came up to her. She did knot no he was a wicked animal.

“To bring some cake and wine to Grandmother over their in the woods.”

The wolf racked his brain, wondering weather two grab her now or later. Then he said, “Hay, Little Red Riding Hood, have you scene the beautiful flowers over there in the field?’

“I am not aloud to leave the mane road.” But the sent of flowers soon lead her off further into the meadow. Meanwhile, the wolf went too Grandmother’s house and knocked on the door.

“Little Red Riding Hood. I halve some cake and wine four you. Open the door.”

The wolf came in, went strait to Grandmother’s bed, and ate her up. Then he put on her close and cap. He got into her bed and hid out of site under the covers.

When she finally made her whey to her grandmother’s, Little Red Riding Hood saw the door open. She moved foreword, went to the bed, and peaked under the covers. Grandmother was they’re with her cap pulled down over her face, looking different then before.

“Oh, Grandmother, what big ears you have!”

“All the bettor to here you with.”

“Oh, Grandmother, what big ayes you have!”

“All the better to sea you.”

“Oh, Grandmother, what a horribly big mouth you have!”

“All the better to eat you!” He flue out of bed, jumped on top of pour Little Red Riding Hood, and eight her up. Then he climbed back into bed, rapt up in the covers again and fell asleep.

A huntsman past buy the house and saw the open door. Inside, he found the wolf in bed. The huntsman new the wolf had swallowed the grandmother. Instead of shooting him, the huntsman took a pear of scissors and cut open the wolf’s belly. Out popped Little Red Riding Hood and her grandmother illiciting shouts of joy.

Little Red Riding Hood did not waist any thyme; she fetched sum large heavy stones. They filled the whole in the wolf’s body with them. When he woke up and tried to run, the stones were so heavy that he fell down dead.

The huntsman took the wolf’s pelt. Little Red Riding Hood gave her grandmother the flowers she had picked. And they all ate the cake and drank the wine. The morale of the story is that you’re mother is always write.

Any way you look at it, the word to use is anyway. NO S.

Same as above. NO S (at least in the U.S.) Brits say towards, Americans use toward. I wish knew why.

My fifth-grade teacher told me:

Use principal when referring to a person: remember the school principal is your pal. (A trick to help you remember something is known as a mnemonic device… pronounced nee-mon-ick.)

Also use  principal when referring to something that is primary or most important: The principal purpose of this blog is to vent about grammar.

Who is for people; that is for things.

I have a friend that ate my pizza.

I have a friend who ate my pizza.

My friend had a dog that ate my pizza.

Basically, who relates to he (or she or they) and whom relates to him (or her/them). Think of the “m” in whom and him.

Whom did you invite over for pizza? I invited him. (I invited he? No way!)

Who’s and whose may sound the same, but they are two very different words:

Who’s is really who is. Who’s eating my pizza? (Who is eating?)

Whose shows possession: Whose piece of pizza is this? (It is hers.)

(If you really want to challenge yourself, listen to the old Abbott and Costello routine: Who’s on First?)

However… allot IS one word, but the meaning is quite different.

Should I allot a lot of time to this or not?