Once again, my world is turned upside down (or for those of you sticklers who insist we cannot end sentences with prepositions … once again, upside down is my world).

At first, I only wrote stories on yellow-lined legal pads of paper and only read books the old-fashioned way – in print, in hardcover. I listened to CDs on a walkman. I had an answering machine. I had a vcr.

But I was determined not to be left behind, so I jumped on the bandwagon – moving slowly from desktop to laptop, from pc to MAC. I went from voicemail to email to text; from flip phone to iPhone. I got an iPod, a DVD player, a scanner!

I was on a twenty-first century roll. And then I thought – this is enough. I could do my editing, share my thoughts, make friends, be happy. I didn’t need Twitter.  That’s for those young punks. 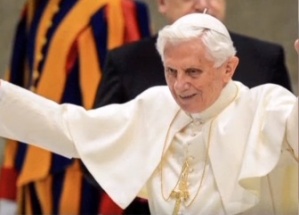 And then I read that the Pope sent out a tweet (in seven languages, no less) on his iPad (@Pontifex – in case you’re interested). He has a million followers already.